Another fallacy and myth dispelled. While many a pundit tries to deny the jobs crisis by claiming lost jobs push people into entrepreneurship, the Cleveland Federal Reserve says otherwise:

A press release announcing a recent report from the Ewing Marion Kauffman Foundation, for example, went so far as to argue, “Rather than making history for its deep recession and record unemployment, 2009 might instead be remembered as the year business startups reached their highest level in 14 years—even exceeding the number of startups during the peak 1999–2000 technology boom.”

Unfortunately, a careful look at the data suggests otherwise. Multiple sources of government and private data show that the Great Recession was actually a time of considerable decline in entrepreneurial activity in the United States.

So, no, when people lose their income, including the self-employed, they don't go magically into their garages and innovate the next great thing. They can't, they lost that garage in foreclosure.

The above graph shows how many people lost income to the point they no longer count as self-employed and working.

The BLS gave characteristics of the self-employed, both incorporated and sole proprietorship for 2009, reprinted below. One thing to note is age. It's quite common to use only self-employed who are over 40, simply to avoid, once again, paying health and other benefits. 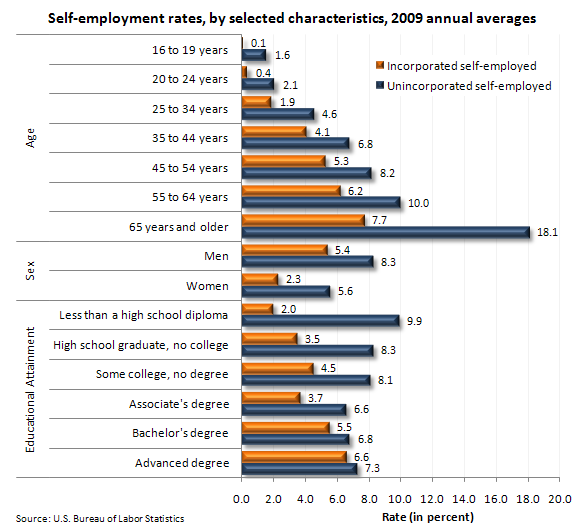 The BLS also gives occupational and sector characteristics for 2010. There appears to be differences between incorporated and unincorporated self-employment as well as industry differences. From the agricultural occupational statistics, where 39.8% of Agriculture, forestry, fishing, and hunting are self-employed, one assumes the technique is really to pay below minimum wage, not pay benefits by hiring temporary, day labor, or for short term work. In other words, tomato pickers are not getting rich by being self-employed. Construction, another common area where day labor is used, has self-employment rates of 17.5%. Other industries where labor arbitrage occurs via the worker as a business status, are the professional technical areas. Businesses try to pay per project and per bid, which results in people with advanced skills working below minimum wage in practice.

One way to stop these abuses would be improve obtaining payment as easy and obtaining denied wages. Stiffing small businesses is common, with no legal recourse that is fast and cost effective available to these self-employed individuals.

86.4% of unincorporated have no employees. Beyond not creating jobs, this also means the self-employed are getting the shaft on reasonable and quality health insurance.

Incorporated self-employed, on the other hand, usually create jobs and here again the Cleveland Fed points out these business severely declined, over 8.9%, in recent years.

Like most things, a strong economy and a strong middle class with supports for opportunity are what generates entrepreneurship. Education, financial, credit, other resources of income, an overall healthy economy and a culture which supports it's citizens are what fosters innovation. Entrepreneurship does not come about by some fantasy punditry trying to deny how dire the economy has really become for millions of Americans.

Read the entire Cleveland Fed research piece. It's a great call out for those who wish to dismiss the jobs crisis as some sort of creative destruction myth. People are simply out creating new businesses and innovating. From the small business optimism index, it doesn't look good to for any of the above to change soon.

The financial fat cats love to extol the virtues of entrepreneurship and self employment and they do everything they can to make sure it doesn't thrive. The lack of protections for earned income is one excellent point. Why shouldn't the law give the self employed the same rights as workers? The brutal cost of health insurance buying direct, as self employed are required, is a huge disincentive.

The self employed are a boon to the country from the self reliant contractor to the garage start ups in the computer industry. There are smart, risk taking people all over the country ready to rock. Why not make it at least doable?

Yes, and somewhere (maybe here at Econ Pop) I have read that Chairman Ryan of the House, who is glorified by corporate media as though he were some kind of financial genius, has never worked in any business where he had to produce a budget or live by a budget, and he has never had to meet a payroll in his life!

He graduated from Miami University in 1995, and since then, was employed regularly as a congressional staffer and speech-writer for GOP office-holders, until his election to the House in 1998. Great business experience, in the business that goes by the initials RNC.

Now Ryan gets a lot of respect from corporate media, as though he represented working people or small businesses and entrepreneurs.

I can hardly wait to invest in the 'U.S. multinational' that will eventually hire him as CEO!

There are many good ideas around about how U.S. policy could improve the environment for small businesses and independent operators, but we don't hear much about any of those ideas - not from Congress nor from the apparatchiks of either party nor from corporate media.

END_OF_DOCUMENT_TOKEN_TO_BE_REPLACED

Even More Ado About Oil - 52404 reads
Welcome to "Economic Purgatory" - 40057 reads
Saturday Reads Around The Internets - Middle Class Economic Armageddon - 12968 reads
State budget crisis getting critical - 41544 reads
It's No ******* Wonder that State Governments Can't Pay Their Bills - 78477 reads
Even the Pope Says Globalization has run amok and steam rolled workers - 33199 reads
Much Ado About Oil - 86782 reads
GM Layoffs will Boost Unemployment Through the Roof - 37797 reads
Another milestone in the demise of the dollar - 26066 reads
Ripped Off MF Global Investors Will Never See That Money - 35441 reads
Will the NY Attorney General Bring Doomsday Charges Against Wall Street? If So, How Long Will He Survive? - 1189174 reads
New York Post Claims Census Falsifies Unemployment Figures - 911143 reads
Safeway Skewered for Throwing 6,000 Workers Under the Bus in Video Parody - 406877 reads
How Many Jobs Are Needed to Keep Up with Population Growth? - 308139 reads
VAT or Value Added Tax is Getting a Look in D.C. - 302607 reads
U3 and U6 Unemployment during the Great Depression - 285915 reads
House discusses 401k/IRA confiscation - 275288 reads
Tax Cuts for the Rich Do Not Generate Jobs - 264453 reads
The war on the middle class - 261760 reads
Delusions of Normalcy 2011 - Dismal Scientists Cheer Up - 252062 reads
.