At the same time, refineries reportedly used 15,458,000 barrels of crude per day during the week, 435,000 barrels per day less than during the prior week, while at the same time, 1,361,000 barrels of oil per day were being added to oil storage facilities in the US.  Thus, this week's EIA oil figures seem to indicate that we consumed or stored 377,000 more barrels of oil per day than were accounted for by our net oil imports and oil well production.  Therefore, in order to make the weekly U.S. Petroleum Balance Sheet balance out, the EIA inserted a phantom 377,000 barrel per day number onto line 13 of the petroleum balance sheet, which the footnote tells us represents "unaccounted for crude oil".  That number is further described in the glossary of the EIA's weekly Petroleum Status Report as "the arithmetic difference between the calculated supply and the calculated disposition of crude oil.", which means they got that number by backing into it, using the same calculations we just performed.

The weekly Petroleum Status Report also tells us that the 4 week average of our oil imports inched up to an average of 8.491 million barrels per day, 9.9% higher than the same four-week period last year.   We should also note that our crude oil exports of 1,026,000 barrels per day is a new record for oil exports, beating the prior record set in the first week of this year by 299,000 barrels per day.  So you'll be sure to see that, we'll include a self explanatory.graph of that jump in our exports from the EIA's crude oil exports page, directly below. 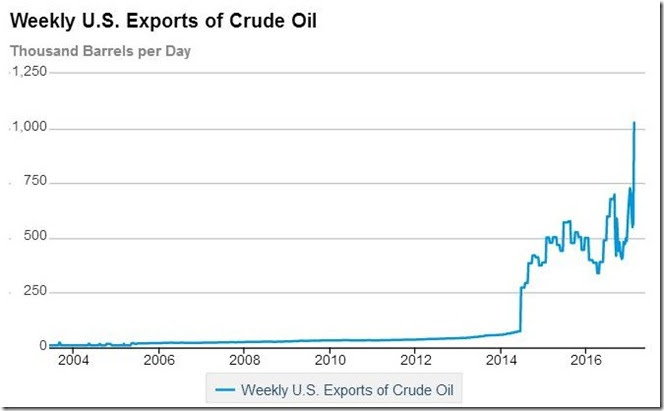 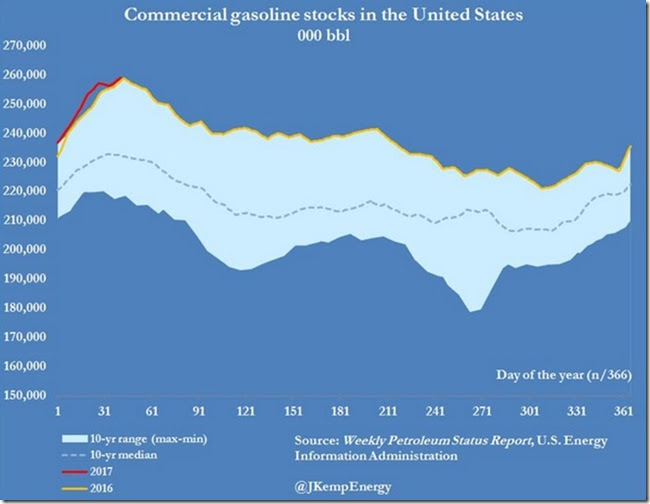 The above graph comes from the twitter feed of John Kemp, who is an energy analyst and columnist with Reuters.  It shows US gasoline stores in thousands of barrels by "day of the year" for the past ten years, with the past ten year range of our supplies on any given date shown in the light blue shaded area, and the median of our supplies, or the middle of the daily range, traced by the blue dashes over each day of the year. The graph also shows our 2016 gasoline inventories traced weekly in a yellow line, with our year to date 2017 gasoline supplies represented in red.   Even with the obvious seasonal variation of higher stocks in the winter and a drawdown of them in the summer, we can clearly see that for almost all of 2016, our gasoline supplies were at a seasonal high for nearly every given date, and so far in 2017, our weekly totals have broke those year old 2016 records.

And that's why what happened this week was an all time record.  Last year, on February 12th, our gasoline supplies rose to a new record of 258,693,000 barrels, beating the February 13th 2015 record of 243,132,000 barrels by 6.4%.  This week's 259,063,000 barrels thus topped last year's record by just a small fraction, but it is still a new record nonetheless.  Recent years have shown that gasoline supplies usually start to fall after the 2nd week of February, (which is clearly visible on the graph), so that may very well happen again this year.  Still, our gasoline stores are now up by nearly 32 million barrels since Christmas, and on track to continue setting seasonal records higher than those set last year..

Lastly, the ongoing elevated level of our oil imports, combined with slack refining, led to another large addition to our weekly inventories of crude oil, which rose by 9,527,000 barrels to 518,119,000 barrels by February 10th, thus topping the previous record high oil supply of 512,095,000 barrels set on April 29th 2016.  So another record high calls for yet another graph... 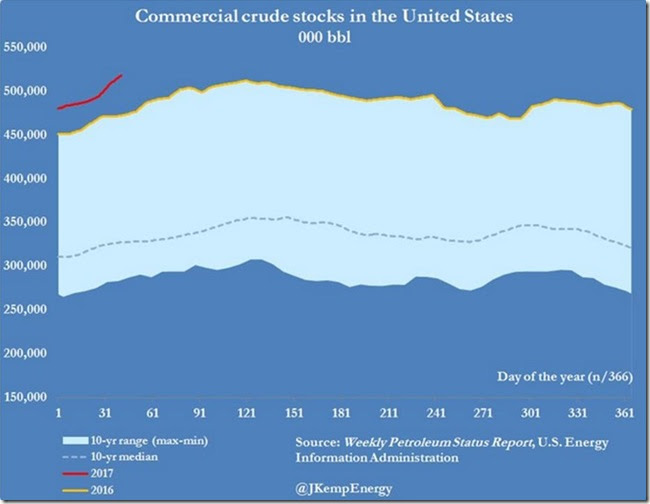 Like the previous graph, this graph also comes from the twitter feed of John Kemp, who seems to post several graphs daily, along with other energy news.  Also like the prior graph, this one shows US oil supplies in thousands of barrels by "day of the year" for the past ten years, with the past ten year range of our supplies on any given date shown in the light blue shaded area, and the median of our oil supplies for any day traced by the blue dashes over each day of the year.  This graph also shows our 2016 oil inventories traced weekly in yellow, with our year to date 2017 oil supplies in red. The difference here, as we saw last week, is that our 2016 oil supplies were not just fractionally higher than those of 2015, they averaged more than 10% higher, while our 2015 oil supplies ran as much as a third higher than those of 2014.  Thus the 2017 oil inventories are that much higher again, and we've now set a new record for oil supplies on the 41st day of the year, which unlike gasoline supplies, tend to continue to rise seasonally until at least the 120th day of each year (when refining for summer gasoline supplies picks up).  As a result, our oil supplies on February 10th were 9.6% higher than the then February record 472,823,000 barrels that we had stored on February 12th of 2016, 32.3% higher than the previous mid-February record of 391,516,000 barrels in storage on February 13th of 2015, and 56.6% higher than the closer to normal 330,956,000 barrels of oil that we had stored on February 12th of 2014.

note: the above was excerpted from my weekly synopsis at Focus on Fracking..