Oil prices crashed along with global financial markets on Friday following the British vote on Thursday to exit the European Union (typically referred to as "Brexit"), which is widely expected to precipitate a period of political instability in Europe.  Conservative British Prime Minister David Cameron, who had campaigned for remaining in the EU, submitted his resignation; British Labor Party leader Jeremy Corbyn also faces a no-confidence vote, as both major parties had campaigned to remain in the EU.  In response to the British vote, populist parties on the left and right across Europe are calling for referendums in their own countries, with speculation that France, the Netherlands, Austria, Finland and Hungary might also vote to leave the EU, effectively rebalkanizing the continent.  Although markets in the US and Britain recovered to end down less than 4%, it was European markets that were hit the hardest, with German and French indexes down 7% and 8% respectively and markets in the southern tier of European countries down more than 10%.  However, since it isn't our purpose here to discuss European markets or politics, we'll refer you to Brexit: What Happens Now? from the BBC for a discussion of what steps the British might take next, and to Brexit: Pulling the Signal Out of the Noise from Yves Smith at Naked Capitalism, who entertains possibilities outside of the most obvious, and who also includes exit polling results.  Yves includes graphics from "Lord Ashcroft Polls - How the United Kingdom voted on Thursday... and why" which are better viewed on the original site, where there are also several more graphics detailing the demographics and the politics of the British vote.  For our purposes, we'll start with a look at how oil prices reacted to this political upheaval.. 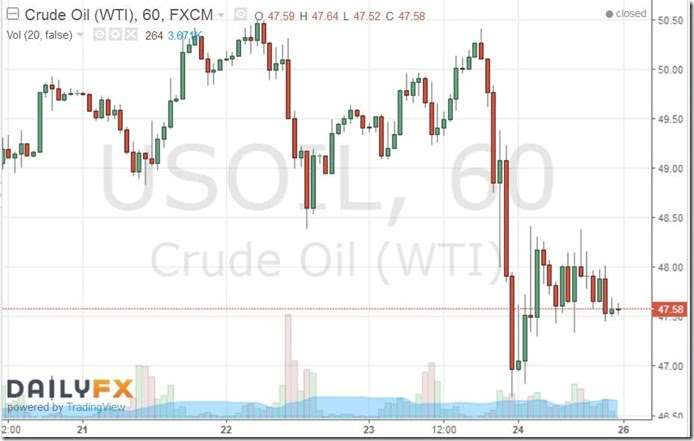 The above graph comes from FXCM, a mostly foreign exchange (forex) online trading website, and it shows the prices that US WTI crude exchanged at through their online exchange, every hour, 24 hours a day, from 2PM Monday till the end of the week.  Since they're providing the trading service, the prices shown aren't to the penny the same as those we’d see at the NYMEX, but they track them pretty closely (otherwise traders would play one exchange against the other), and they also trade oil after the regular exchanges are closed.  In this candlestick style graph, there's a red or green bar for every hour over this period, and each bar shows the price of oil at the start and end of the hour indicated.  When the price of oil went down in a given hour, the bar is red, and when the price closed higher at the end of the hour, the bar is green.   Note that most of these red and green "candlesticks" also have light grey "wicks" on either end, which represent the range of prices outside of the beginning and ending price that oil traded at over that one hour period.   Thus we can see that oil prices rose as high as $50.50 a barrel on Wednesday morning, and topped $50 a barrel again late Thursday, before the first results from the British voting came in.  Then, as the vote results became clear, oil prices then fell more than 6% over the next 6 hours, trading below $47 a barrel for a short period before buying resumed, which pushed the price back up to $48.  Oil then traded in a range between $47.30 to $48.40 a barrel the rest of Friday, and ended the period shown here at $47.58 a barrel (this graph is from Friday midnight, thus including after hours online trading; officially, oil closed the week at $47.64 a barrel on the NY Mercantile Exchange)

It's important to recognize that there was no fundamental change in the supply of or the demand for oil and its products that drove that price change, or a similar drop in the price of the international benchmark Brent oil over the same period.  Those with cars in Great Britain and Europe will be driving them next week as they were the week before this vote, and European industries consuming petrochemicals will continue to operate.  It may even take a year or two before the political ramifications of Thursday's vote are sorted out, much less begin to affect the economies in those countries.  With this crash as a backdrop, however, the coming week will likely be telling us a tale about the ultimate trajectory of oil prices for the months to come.  If oil prices stay at these levels or even drift lower, it will be a pretty strong indication that the $50 a barrel level will be the limiting top price for some time to come,  However, if oil prices recover from these losses and push back over $50 a barrel again, then they've beaten the panic that caused this week's price crash, and might well move higher the rest of the summer, even as US drilling activity resumes.

The Latest Oil Stats from the EIA

This week's oil data from the US Energy Information Administration indicated another drop in our production of crude oil, a spike in our oil imports, an increase in refining to near seasonally normal levels, and record levels of both gasoline production and gasoline consumption.  However, the crude oil fudge factor included on the weekly U.S. Petroleum Balance Sheet (line 13) was a minus 253,000 barrels per day, which means that 253,000 barrels of oil per day that we appeared to have produced or imported last week did not show up in the final consumption or inventory figures.  That follows an adjustment of +335,000 barrels per day during the prior week, a swing of 588,000 barrels per day from the last report, which is certainly enough to call into question most of the weekly changes we'll review today.

Finally, even with the disappearance of 253,000 barrels per day in this week's EIA data, that big spike in imports limited our withdrawal of oil from our stocks of crude oil in storage to 917,000 barrels, under a million for the 2nd week in a row, at a time of year when are stored supplies of oil are usually being used up twice as fast.  Thus our oil inventory level of 531,543,000 barrels on June 17th was 14.6% higher than the 462,993,000 barrels of oil we had stored as of June 19th, 2015, and 36.7% higher than the 388,090,000 barrels of oil we had stored on June 20th of 2014.  With our oil inventories continuing that much higher than the seasonal records we set every week in 2015, it goes without saying that our crude oil supplies are also  "well above the upper limit of the average range" for this time of year..."

(Note: the above was excerpted from my weekly synopsis at Focus on Fracking)

I think much of this is shear panic versus real impact. Brexit.