It's Friday Night! Party Time!   Time to relax, put your feet up on the couch, lay back, and watch some detailed videos on economic policy!

First up is a very good interview of Stiglitz by trade expert Lori Wallach on the Financial Crisis. Book TV doesn't believe in embedding so just click on the image or click here to watch the interview. 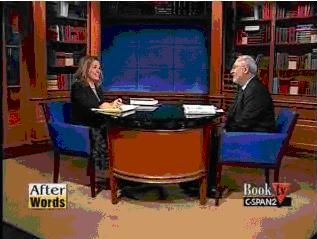 Here is an in depth talk at the New American Foundation:

Here is Lori Wallach on the Rise and Fall of Fast Track Authority. Wallach really is an expert on trade treaties, the rules, (and on our side too), so if the WTO confuses you, watch this one.

I heard Prof. Stiglitz in an interview with Amy Goodman on her Democracy Now program earlier this week, and he was absolutely and utterly brilliant!

He nailed everything completely, tying the negative stimulus behavior at the state level with what had also occurred during the Great Depression (are you listening, Bernanke????).

Yes....Prof. Stiglitz has come back to the fold.

He did say one thing, possibly for diplomatic or tactful reasons, which I would take issue with. Stiglitz said there was only, or just, one person in Obama's administration tied to supporting the disastrous legislation repealing Glass-Steagall and allowing for the robbing of Main Street and the American people. [I'm inferring he meant Larry Summers.] But, of course, there's a whole bunch of people in Obama's administration who supported, both directly and indirectly, that legislation (as in Gensler, Hormats, Allison, Orszag, Farrell, Tyson, etc., etc.).

Eventually, (it may already be in the news and I've missed it) it will come out that all those people who helped hide that sovereign debt for countries like Greece, Italy, Ireland, Portugal, etc., back a few years ago while at Goldman Sachs and other firms, are now in the Obama administration.

Surely not a confidence builder?

who was all cheerleader rah, rah for "free trade" but he also wrote about the actual real implementation of NAFTA and wrote at length on how it was a job and economic killer, not only for the U.S. but especially for Mexico.

Do you have an embed or link for the Democracy now interview?

We should add it here since it's "Stiglitz" hour.

Lori Wallach works at Public Citizen and I cannot think of anyone in the public sphere who has more knowledge and expertise on trade agreements (who isn't some corporate lobbyists or puppet).

Clip is at this site.