Brought to you by the private health care insurance companies - We get ours and yours too, guaranteed.

Good Morning! Rise and Shine! Get that Cup O' Joe...break out the O.J....hang out with the pooch...for it's time to check out the Obamacare funnies.  Believe this or not corporations, politicians and special interests are now paying to make go viral comedy sketches in order to spread their message.  The below Obamacare parodies have been screened for accuracy and amusement without the lobbyist spin infliction.

This just in.  Obama plans to fix health care in a variety of ways, some of which include: 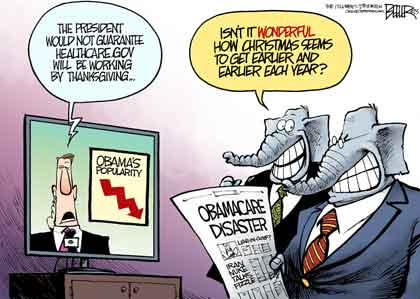 The GOP releases options for replacing Obamacare.  Just a few plans disclosed are:

President Obama told reporters this morning, explaining that the nearly three dozen 3.5-inch diskettes contain all the data needed for individuals to enroll in the Health Insurance Marketplace, while noting that the updated Obamacare software is mouse-compatible and requires a 386 Pentium processor with at least 8 MB of system RAM to function properly. “Just fire up MS-DOS, enter ‘A:\>dir *.exe’ into the command line, and then follow the instructions to install the Obamacare batch files—it should only take four or five hours at the most. You can press F1 for help if you run into any problems. And be sure your monitor’s screen resolution is at 320 x 200 or it might not display properly.”

The winner of one-liner wonders is Jay Leno with this:

Would Obamacare Have Saved Walter White?

Ha, yeah, it's me. Anyway, I tore myself away from books and knowledge to watch TBTF/PTB TV to see those assclowns Buffett and Gates on "60 Minutes." Anyway, the Oracle of Omaha, you know, the same guy who was born to a member of Congress and inherited wealth, and Gates, you know, the guy that loves ripping other people's genius and ideas, not paying them for it, and then lobbying the DOJ and others to protect his ill-gotten wealth were just on "60 Minutes" talking about what great philanthropists they are. Now I'm not sure what Buffett did exactly regarding ideas or anything novel (besides lobbying the White House directly, getting sweet deals regarding Goldman, etc.), and I'm sure Gates ripped many of his ideas, made loot off them, and now perjured himself in front of Congress regarding "lack of qualified Americans" (see Youtube for the evidence) so he can abuse visas. And then he's got the antitrust issues, IP theft issues, etc.

But hey, these scumbags have PR firms kicking ass for them and the masses on "60 Minutes" literally talking about how Gates is helping rid the world of polio. NOT ONE MENTION OF SALK! Not one! Jesus, Salk, the man who said he wouldn't/couldn't profit from helping prevent polio, is now being drowned out in his grave by these dicks! Imagine Gates or Buffett in this interview?

Edward R. Murrow: Who owns the patent on this vaccine?
Jonas Salk: Well, the people, I would say. There is no patent. Could you patent the sun?

But Jonas, didn't you realize people that aren't millionaires or billionaires or were willing to crush the competition were/are jacksh*t in the world in 2013? Why, unless you crush everyone and profit off everything and rule other people's lives, how could you matter in the grand scheme of things? I mean, really, if you don't appear in movies or in boardrooms or in a Senator's house or on "60 Minutes" or in Forbes you are nothing. Come on now, greed and press and winning is all, humanity and ethics and humility and modesty be damned.

USA 2013! Because $$ and fame is all!! And people that barely make a living wage donating to worthy causes don't matter at all when compared to boardroom billionaires that use "philanthropy" merely as another tool to lobby for what they want and as another tool in their arsenal to make more money for themselves. Oops, was I not supposed to know that? Was I supposed to believe they were doing it out of the goodness of their hearts?

And I think the lady that founded Spanx was also on TV. Ain't our country great?! Tesla is a zero in our history books. He'll never get press or airtime. Salk is jacksh*t. But hey, Spanx founder and Buffett and Gates and all these others tools are on TV and running our Nation through their punks in DC and state capitals and the TV studios. Well, time to up the glue sniffage because my brain is always getting in the way of just getting along with the blue pill bullsh*t. Duh, Gates is good, duh, Buffett is rich = he must be smart and ethical, Spanx founder is rich = she must be more qualified than me to have a voice in my Nation's policies. WTF, put a fork in the USA, because WE'RE DONE!

It's amazing what these people do with their PR and endless crap. Read, read, turn off the TV, and read some more. This country is Rome 400 AD. Realize. Oh, look, the scum in DC and the corporate boardrooms want to destroy us internally and externally for a few pennies more (and a few more ass-kissing articles more) and then will blame us for our downfall. Awesome, what complete d*cks.

You must have Javascript enabled to use this form.

When the line opened with "oh 400 people make half of the income but you should be GLAD"....
they "give" so much I about threw up. They give to 3rd world and want to offshore outsource more jobs, not America.

Disgusting and that's the third "story" of 60 MInutes in a matter of months which proves they are corrupted.

You must have Javascript enabled to use this form.